Another new discovery while we were in Mound Bayou last week was downtown Merigold, Mound Bayou’s next door neighbor.  We were on our way to Po’ Monkey’s when we made a detour to look at a church building, and whilst going around the block, I discovered downtown.  One of the students shares my love of architecture and old buildings, so we rambled through the blocks of remaining (mostly empty) storefronts.  Clark Drug Store, and neighboring storefronts on Front Street are listed as circa 1940 (estimated) by MDAH database.  There is no other information about these buildings, other than I found a reference to Clark’s Drug Store in a copy of the 1937 Fidelis, Merigold’s school yearbook. 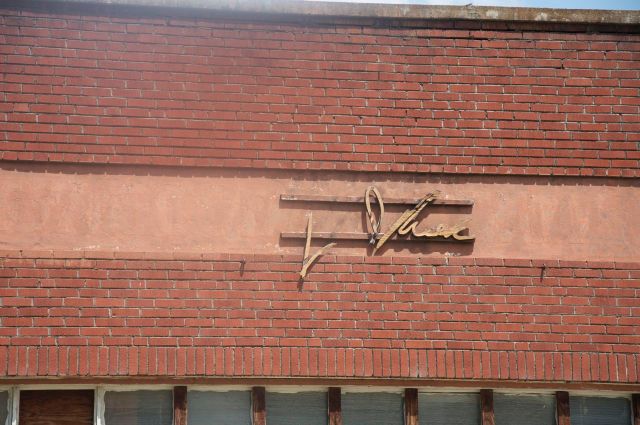 I have puzzled over this sign, but cannot determine what it might say.  There is no reference in the Fidelis to a store that resembles these letters.  If anyone knows, please comment!  I am speculating it was some type of clothing store–the fancy script in the sign leads me to that conclusion.

I also cannot determine what this design painted in the doorway of Clark’s Drug Store is supposed to represent either, if anything.  It most closely resembles a bug of some sort, or some type of symbol.

I was marveling over the details of the window front (taking the picture through the glass of course) and the students were asking “what is Pangburn’s?”

Visible through the front door is the old paper holder–I have one just like it.  It held a roll of paper, and there is an edge that enabled the merchant to tear off the paper to the desired length and then wrap the purchase and tie it with string, and later, tape. 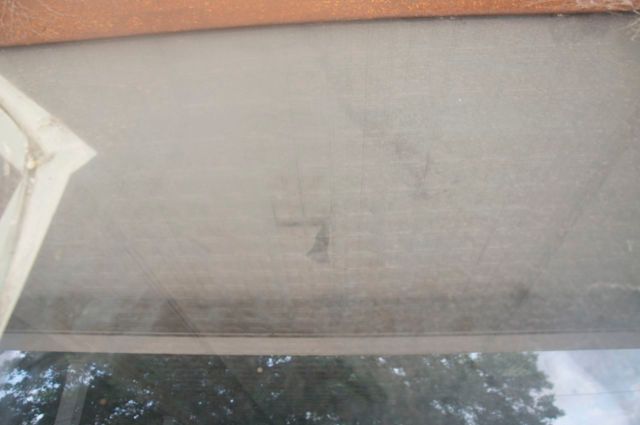 The tin tile ceiling is still in good shape, or at least appears to be so from looking through the front glass.  I cannot foresee these storefronts being developed and they will likely continue to deteriorate along with the rest of downtown Merigold.  Tomorrow, we’ll continue on around the block, on the other side of the tracks–or at least, where the railroad tracks used to run through the middle of town.  Like the other towns along the old route of the Illinois Central, the actual tracks are long gone.

Like Loading...
This entry was posted in Mississippi Delta Towns and tagged Clark's Drug Store, Merigold. Bookmark the permalink.