Yesterday’s post was about the Gong Company, a Chinese-owned grocery store in Merigold.  Next door was what we assumed to be a separate store, although the sign is definitely revealing a connection.  I am going way out on a limb here, and this is total speculation, but then I have been known to draw some conclusions on shakier data than this.  I also always point out that I am connecting a theory, not stating it as fact. 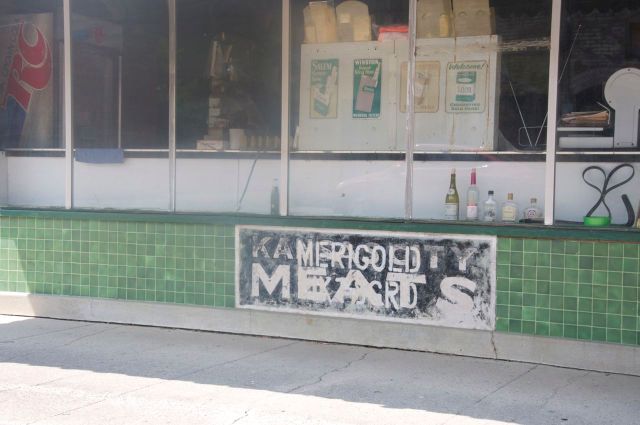 Under the Merigold Meats sign, which is what led us to think it was a different store, is visible Kansas City Mkt & Gro.  The Gong family store sold “fancy groceries and Kansas City meats” according to the ad in the 1937 Fidelis.  Based on the scale just visible inside the window and the older less visible sign, I think this was part of the Gong family store, housing the meat market section.  It looks like the scale now only holds file folders rather than weighing foods.  Given that there are almost no meat markets anywhere anymore (the kind where a butcher cut the meat from a side of beef in a freezer in the back), it would stand to reason that the meat market is no longer a viable business in a small Delta town.  What we observed in Shelby and Clarksdale is the ubiquitous “pick 5” for $17.99–although where it originates is not identified.

Love the screen door–should have kept flies out of the market on those hot summer days in the Delta.  The door handle style was common on doors in the part of Texas where I grew up, and were usually advertisements for Mrs. Baird’s bread, made in Fort Worth and Abilene.  Those had a small sign attached to the right of the handle with the Mrs. Baird’s name.  The smell of baking bread permeated South Treadaway in Abilene, only blocks from my cousin’s house.  One only had to step out of the back door and it was almost like being in Mrs. Baird’s kitchen. As you entered Fort Worth, you drove past the Mrs. Baird’s bakery, and in the early years, the smell of bread was stronger than the exhaust fumes from cars.  The bakery was demolished several years ago to make way for a new freeway, and the bakery in Abilene closed a short while ago.  Like this meat market, relics of the past.