Update: The April 12, 2012 edition of The South Reporter states Cathrine Hall is under demolition, but that Preserve Marshall County and Holly Springs is working to try to save the facade to maintain the streetscape.  The April 19 edition reported demolition had begun, but was halted in order to allow assessment as to whether any portion of the building could be saved.

Mississippi Industrial College in Holly Springs has been on the minds and hearts of its alumni, and historic preservationists and folks who just appreciate the significance of the college in the history of Mississippi.  (You can read more about MIC and the current state of affairs here, here, & here.)  I was traveling home from Memphis a couple of weeks ago and had occasion to be coming in on the back highway that leads up to MIC.  I noted the roads were now chained off to prevent vehicles from driving up to the buildings, and there are numerous NO TRESPASSING signs posted.  I don’t know when that happened, as they were not there on my last trip in 2010.  Then again, a lot of pictures turned up on the Internet in 2011 and 2012 where folks were clearly inside the buildings. and that can be dangerous for a variety of reasons.

I went back last week to see if I could get some photographs of the current state of Cathrine Hall–from the public sidewalk–and noticed workmen stacking bricks beside Cathrine Hall.  I cannot find anything on the news about it, but it appears as if they are clearing brick from when the rear wall collapsed following a storm in 2010.  There were a number of pick up trucks parked around the building…

…along with more “supervisors” than workers from what I could see.  There is a Holly Springs building permit visible, next to the No Trespassing sign on the front lawn.

It was unclear where this worker was transporting his load of bricks, or why he was going in front of the building.  The sky is definitely visible through that window, which may or may not mean further collapse–or intentional dismantling–of the rear wall.  I do know that in 2010, you could not see through this end of the building.

The damage from the 2010 storm was on the rear wall and roof, and I cannot determine if it has advanced toward the front of the building from my vantage point out in the street.  Note the worker has now gone all the way across the sloped front lawn with a wheelbarrow full of bricks, and is headed towards the rear of the building–an area that is relatively flat at the back of the building, and is on a roadway. 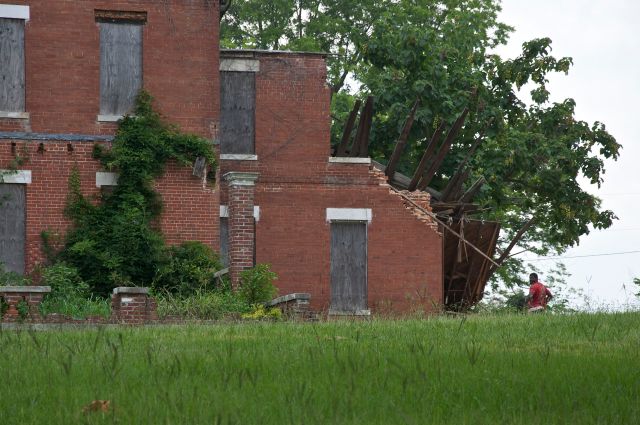 In contrast to the the first worker–who seemed to be saying “stop taking pictures” after I had been standing there photographing from various angles–this man seems more curious (or perturbed) at my presence than interested in whatever he is attempting to do.  The roof on the section of the building visible does seem to have totally collapsed, but it is difficult to tell from this angle.  Comparing this with the rear view of the building in 2010, it appears markedly different.

In 2011, Senator Thad Cochran requested $3 million from Congress for work on Mississippi College, but it was declined.

Like Loading...
This entry was posted in Mississippi and tagged Cathrine Hall, Mississippi Industrial College. Bookmark the permalink.