Chalmers Institute: Not on the 101 Places in Mississippi to see before you die list 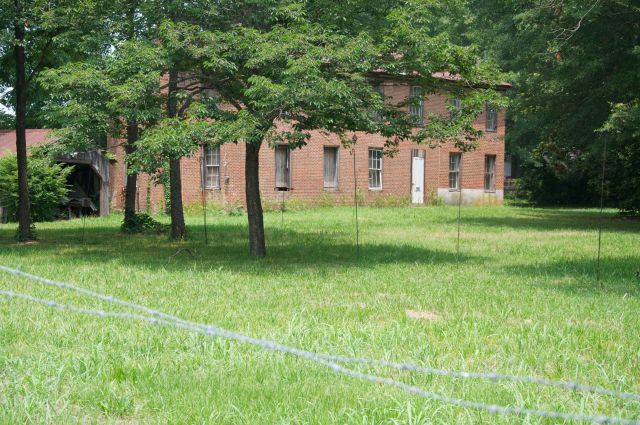 Perhaps just looking at the building right now, one might think Walter Place or Airliewood was more deserving of being on the 101 Places in Mississippi to See Before You Die list, but the history of this building–and its future–seemed much more interesting to me.  Then, again, I am not much interested in seeing antebellum houses, although I confess the uniqueness of Walter Place amongst antebellum mansions in Mississippi.

Chalmers Institute is the oldest university building in Mississippi, and the second oldest school building, built in 1837, according to the Mississippi Heritage Trust which listed it in 2000 as one of the 10 Most Endangered buildings in the state.  The building became part of the University of Holly Springs in 1838.  The Heritage Trust identified it as significant for its masonry construction, a rarity at the time of construction “on the frontier.”

Listed on the National Register of Historic Places in 1982 and a Mississippi Landmark in 2003, the building is a Federal style with hip-roof and interior end chimneys.  The otherwise “unadorned” front features “brick flat arches [that] cap the windows” (NHRP nomination, 1982).  The University of Holly Springs closed in 1839, after the state university was placed in Oxford.  The building was transferred to the Methodist Church who established a law and medical school in the building.  That failed in 1843 and the building was vacant until 1850 when it was re-opened as the Chalmers Institute, a school for boys.

Section 6 of Senate Bill 2988 in 2003 authorized $90,000 for repair and renovation.  The authorization required that unexpended monies would not lapse into the General Fund and interest or earnings would be deposited back into the Repair and Renovation Fund.  After that, it all gets a bit fuzzy. In 2009, the MHT reported an update that the Preserve Marshall County and Holly Springs organization was seeking an accounting from the city on the use of the funds.  The Board of Aldermen reported that the city had to pay $98,600 of debt on the property or have it be foreclosed.  The preservation group obtained the property in 2003, and donated it to the city as a municipality had to hold the property in order to receive the state allocation.  I can find no information on why the property retained a debt of almost $99,000 in 2009.  The update on MHT showed that the preservation group bought the property back (huh? from whom–the city that they donated it to?) and were seeking accounting for the repair and renovation funds.  The organization cleared the grounds in 2010, and held a fundraiser in 2011 in which they raised an estimated $23,000.  In December 2011, the group was awarded $49,156 from the Mississippi Department of Archives and History for stabilization of the exterior envelope.  It appears that the work has not yet begun–at least as far as I could determine.

Like Loading...
This entry was posted in Mississippi, school houses and tagged Chalmers Institute, Holly Springs. Bookmark the permalink.

7 Responses to Chalmers Institute: Not on the 101 Places in Mississippi to see before you die list