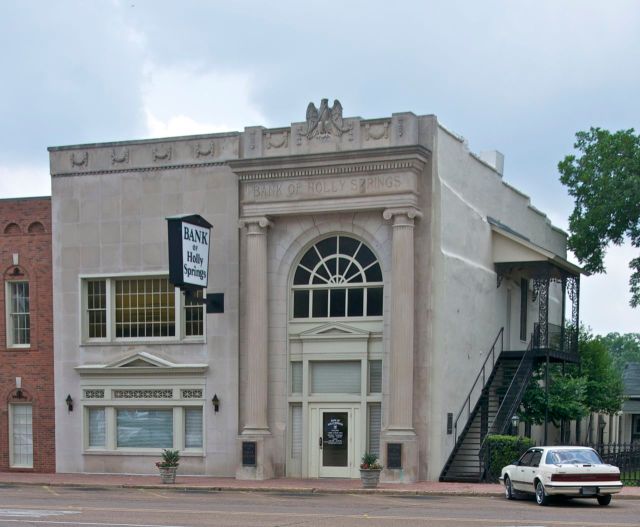 The Bank of Holly Springs building, circa 1910, is identified in the MDAH Historic Resource Inventory–the best Internet tool since sliced bread and frozen strawberries–as Beaux Arts style.  Not being familiar with it, I discovered after some sleuthing that it means “fine arts” in French, and was based on ideas taught at Ecole des Beaux-Arts in Paris.  It was a popular style from 1885-1920, but after that, began to be thought of as “ostentatious.”

The style combines classic architecture (Greek and Roman) with Renaissance ideas.  Features may include massive and grandiose size, stone construction, “lavish” decorations (see for example the swags at the top of the building), columns, and large arches.

The three buildings to the left in the photo (from right to left) are identified as circa 1875, 1890, and 1875 respectively, by the HRI database.  There appears to have been alterations to the facades of all three buildings–where is the door on the building next to the bank?  What’s up with the different style fourth window in the far left building?  When was the 1960s metal canopy removed from the building next to the bank, and why?

Like Loading...
This entry was posted in Bank buildings and tagged Beaux Arts, Holly Springs, Mississippi. Bookmark the permalink.