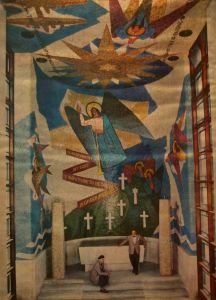 When Artist Francis Scott Bradford was asked to decorate a chapel commemorating U. S. World War II dead buried in the military cemetery near Cambridge, England, he decided the design would look best in mosaic.  Though he had never made a mosaic, Bradford went to Italy, where he procured chunks of blue glass and various shades of Italian marble he needed and chopped them up into some two million tiny pieces.  Then, taking along some Italian artisans to help, he returned to England and stuck the marble and glass piece by piece into the cement on the chapel wall and ceiling.  Last month, with the two millionth piece in place, Bradford completed the reverent testimony to the men who, in the words of Architect Robert Dean’s ceiling inscription, “from these friendly isles flew their final flight and met their God.”

According to the article, the cemetery contained 3, 811 graves, and the wall at the right of the reflecting pool listed 6,000 Americans who were still missing at the time of the construction of the memorial. 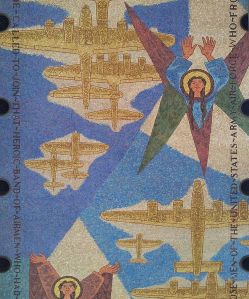 The cemetery was erected as a temporary site in 1943 on land donated by the University of Cambridge (Cambridge American Cemetery and Memorial, The American Battle Monuments Commission).  It was later declared a permanent American World War II military cemetery and dedicated in 1956, 3 years after Bradford completed his mosaic.  Many of the Americans interred in the cemetery were crew members for the British-based American aircraft, who flew sorties from the British Isles to Germany and over the Atlantic.

Like Loading...
This entry was posted in Cemeteries and tagged Cambridge American War Memorial. Bookmark the permalink.