While over at the University to make photos of the Walton-Young house for Preservation in Mississippi, I noticed the tortoise-like sculpture.  It has been a few years since I was last in this building for a class, and I don’t recall the rock sculpture being there at the time.  It was hot and humid as only Mississippi can be in the summer, but I was hooked.  Take a closer look:

Doesn’t if make you wonder what gave the artist inspiration for a work like this?

Several pieces of rock also adorn the outdoor garden.  The little tubes are amazingly intricate.  It resembles both petrified wood, and volcanic rock.  It is called iron-cemented sandstone and can be found in northern and central Mississippi.  According to the information marker, its shape is thought to represent preservation of the bog and swamp areas in which it originated–which probably explains why it looks like petrified wood.

The fragments of iron-cemented sandstone show all degrees of rounding, ranging from pieces that are almost entirely angular to some that are nearly spherical, and it is generally difficult to determine whether the rounding is due to wear or to concretionary of some other cementation. 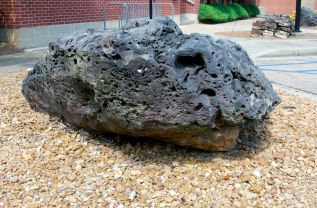