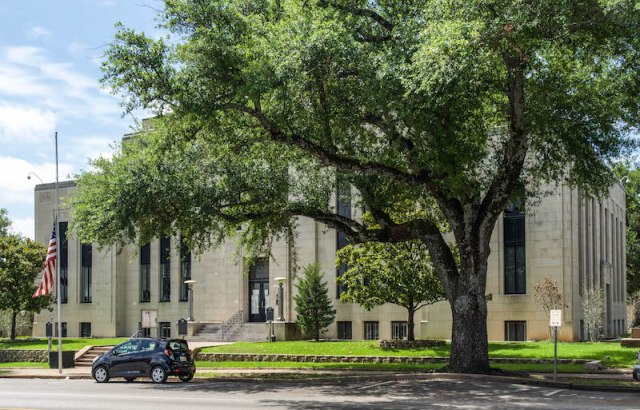 I love that I can now spot a New Deal courthouse as soon as I see it!  I was in dire need of a break from driving yesterday, albeit having hardly been on the road at all, and exited at the Canton, Texas stop and headed downtown.  I parked and walked the lovely little Square.

The Art Moderne courthouse constructed in 1936-1937 is the 6th courthouse for Van Zandt County.  The 5th was designed by architect James Riely Gordon, and was a Richardson Romanesque style constructed in 1896 and demolished in 1935.  Apparently since Van Zandt seemed to go through courthouses fairly quickly (six in 89 years), they had the foresight to begin a courthouse fund in 1886, when it dedicated a new courthouse.  In 1929, the discovery of oil in East Texas caused the fund to skyrocket, and it reached $125,000 in 1935 (“Free State of Van Zandt” now has new debt-free $210,000 courthouse building, 16 June 1937, Lubbock Morning Avalanche, p. 1).

Wichita Falls architects Voelcker & Dixon used similar Art Moderne details to their other Texas courthouses during this period in designing the brick with cast stone veneer courthouse.  Contractor was L. W. Wentzel.  The Public Works Administration (PWA) provided a grant of $86,000 (The Canton Herald, 22 November 1935, p. 1).  The new courthouse was formally opened June 15, 1937, and remains in use today, apparently largely unchanged, and has been standing for almost as long as the other five courthouses added together. 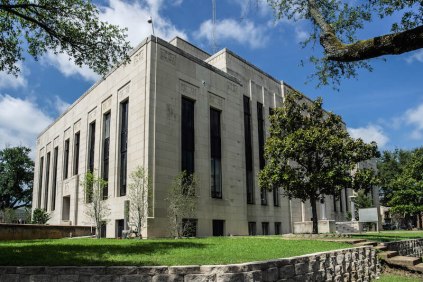