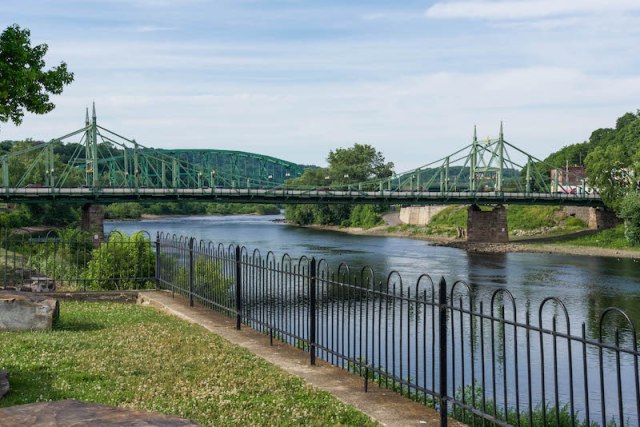 The first crossing of the Delaware River between Easton, PA and Phillipsburg, NJ was ferry in 1739, at the junction of the Delaware and Lehigh Rivers.  The ferry operated for 50 years until greater commerce and travel between the two cities rendered it obsolete.

Timothy Palmer, considered one of the best bridge builders, constructed a covered wooden bridge which opened in October 1806.  Palmer’s work was so exceptional, his bridge remained standing even though storms and floods on the river caused others to fall (Delaware River Joint Toll Bridge Commission).  Increasing volume of traffic and use of trolley cars resulted in the need for yet another new bridge.

James Madison Porter III designed the current bridge in 1896.  Northampton Street Bridge is one of the oldest and most unique bridges operated by the Delaware River Joint Toll Bridge Commission.

It’s an engineering landmark.  Only one other cantilever bridge of this particular style…spans the Danube River in Budapest, Hungary. (Frank McCartney, Executive Director of the bi-state Delaware River Joint Toll Bridge Commission) 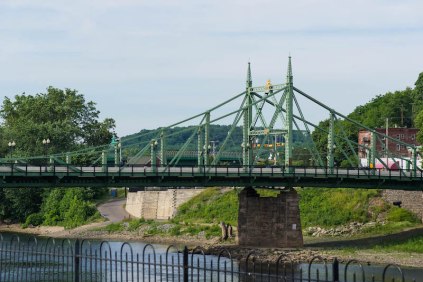 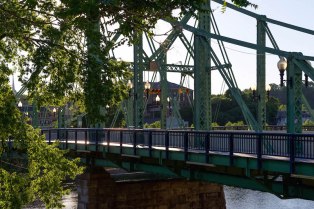 looking toward Easton from Phillipsburg bank

looking toward Phillipsburg from the Easton bank

The bridge is a National Historic Civil Engineering Landmark.