Route 611 (Front Street) runs alongside a section of the Delaware River in Easton and intersects with Northampton Street, which extends across the Free Bridge into Phillipsburg, New Jersey.

Everything in this part of the country deals with the Colonial history of the early years of the nation.  Washington did visit a tavern in Easton (more on that later), and there was an army hospital in Easton.  Easton was strategic in location, due to having a ferry that crossed from Easton to New Jersey and warehouses that could be used for storage (Verenna, 2014, Easton’s Missing Dead).  The mural, by Robert Ranieri, depicts Sullivan’s March campaign of 1779 against the Iroquois (Richard F. Hope, Easton History) 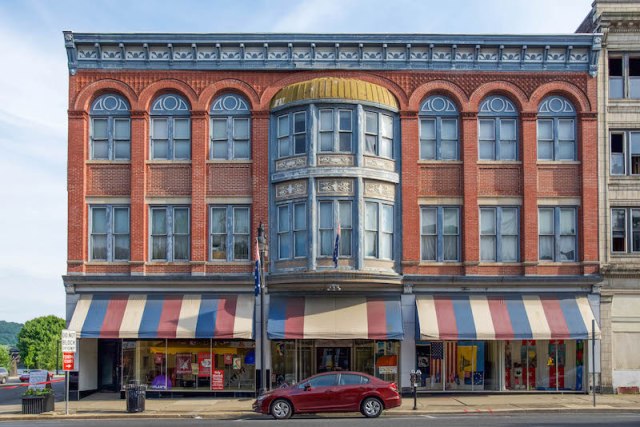 Northampton Street has a lengthy history behind it.  The Sherer Building originally housed several businesses earlier, and the Sherer Brothers opened their first clothing and hat store for men in rented space on Northampton Street in 1880 (Richard F. Hope, Easton History). They purchased the property 4 years later, and twice enlarged the store, in 1890 and in 1904.  A photograph of the section of Northampton c. 1895 showed a four-story Italianate Building under the “Sherer Bro’s” sign, and it “did not extend as far toward Front Street,” the street to the left of the photo above.  In 1903, the Sherer Brothers purchased flood-ruined property adjacent (next to Front Street), which provided

the opportunity to construct the massive Sherer Building structure of today….A picture of the building in 1905 showed a structure looking much as it does today: three tall stories, with seven window bays: a central oriel surrounded by three double-story arched windows on each side, with picture windows on the ground floor and a bracketted [sic] moulding at the roof line. (Richard F. Hope)

Apparently, the Sherer Brothers constructed their building on top of foundations from the earlier buildings, and incorporated exterior walls of earlier buildings into the new construction.  A staircase abruptly ended at a wall on the third floor, suggesting the four-story building was cut down to three (Hope).  The Sherer heir (Samuel’s widow) sold the building in 1944, following the deaths of Samuel in 1934 and Moses in 1943.  It is currently occupied by the Kaplan family, who manufacture awnings.