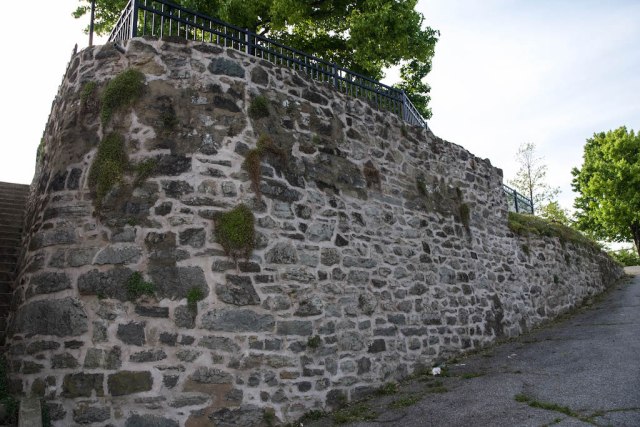 The story behind the stone retaining walls that help protect the town of Easton, Pennsylvania from flooding of the Lehigh and Delaware rivers–which meet just to the left of this wall–have eluded me in terms of detail.  According to The Morning Call (Nerl, 1999), the stone retaining walls along Route 611 in Easton were WPA projects.  A search of Pennsylvania newspapers between 1934-1942 located many references to retaining walls constructed by the WPA throughout the area along the Delaware and Lehigh rivers, and Bushkill creek, although none clearly specified the exact location here at Easton.  It is highly probable that the walls at the confluence of the Lehigh and Delaware where Northampton Street ends at the Delaware were built by the WPA.  The area has been prone to flooding since the town was first constructed there, with the first recorded flood occurring in 1747 (Northampton County Guide, written and compiled by the Federal Writers’ Project, Works Progress Administration, 1939, p. 33).  Other floods occurred in 1840, 1841, 1862, 1902, 1935, 1936, and 1938–prior to the date the book was published.  Flooding again occurred in 1940 and 1941. 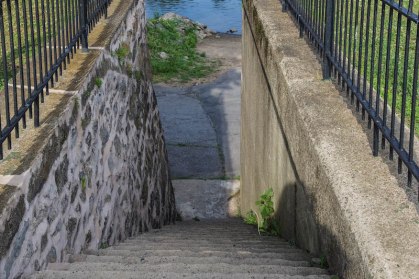 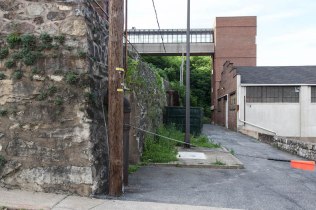 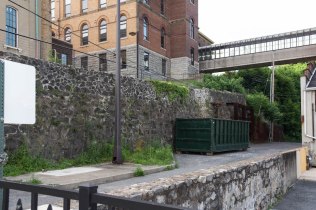 Since 1936 the United States Engineering Corps has completed a flood prevention plan, which includes the widening of river channels, and retaining walls have been built along the Delaware River and Bushkill Creek at Easton, as well as on the Lehigh River, and Monocacy Creeks, at Bethlehem. (Northampton County Guide, p. 34)

Retaining walls at the Lehigh and Monocacy in Bethlehem are documented to have been constructed by the WPA between 1936-1939.  Following the Great Depression, and the New Deal Administration programs that built resources and put unemployed to work, flood control in Pennsylvania dominated news.

Destructive floods of the past few days in Northeastern Pennsylvania impelled members of the State’s Congressional delegation today to press for federal action on flood control projects for the Delaware and Susquehanna Rivers and their tributaries.

Representative Walter of Pennsylvania announced he had requested the War Department to make ‘immediate application’ for public works funds to eliminate the flood menace on the Upper Delaware, near Easton. (Wilkes-Barre Record, July 12, 1935, p. 16)

The 1936 flood waters of the Lehigh and Delaware paralyzed Easton, closing Route 611, and inundating the business district under 6 feet of water (Danville Morning News, March 13, 1936, p. 5). In 1937, the Army Corps of Engineers recommended construction of flood control walls (Reading Times, August 19, 1937, p. 11).  However, by 1939, Army Engineers decided following a survey of the Delaware River at Easton that

…flood control works necessary to keep out all high water would be ‘too expensive for the benefits received.’ (Lebanon Daily News, February 10, 1939, p. 8)