Several years ago right after I got my first iPhone, I walked into the living room to see Rex lying contentedly on the sofa with Mr. Pumpkin–his favorite squeaky toy.  I snapped a photo, and then a second one.  Rex did not like having his picture made–he did not like the black box in front of your face as you took it, and he did not like the flash.  He was not expecting that the little rectangle I was holding in my hand was a camera–until the flash.

Rex was a rescue dog, and there was little known about his history before he came to us.  With much unconditional love, and a very healthy respect for his boundaries, Rex, and we, adjusted to our family and he became a beloved and devoted member of our pack.

The second I saw his body language shift, I knew I had failed to respect that boundary he needed, and as I had learned to do, backed out of his space and put the phone away.  He went from high alert back to his contented position.  A bit later, I sat down in the chair and watched him, thinking to myself how important it is to respect others’ boundaries, and when we see another in distress, adjust our own behavior.

A few months ago, Jean on Social Bridges posted a video of Puppy Stan, called “Sussin’ the Scene.”  I told Puppy Stan it was a perfect illustration of data collection and assessment and asked if he wanted to be a guest speaker in my social work practice class.  Puppy Stan asked if when I did, would I have the class write him and tell him what they thought of his “lecture.”  If you watch the video (and you should to get the full impact!), for 2 minutes and 43 seconds, Puppy Stan sits, listening to all the delicious sounds in the woods–different species of birds calling, the sound of whirring wings as a bird takes flight, snapping of twigs, and what finally sounds like the sound of ocean waves.  Through it all, Puppy Stan sits, yet ever attuned to what he is hearing: he looks around, towards sounds, but he never wildly charges off in search of any of that deliciousness.  (I learned that is what sussin’ is).

It struck me as an apt metaphor for what I had been trying to help students see as we moved into engagement, data collection, and assessment: The importance of being able to “be” with the client, and not get distracted with rushing off to start problem solving.

I often use photographs of “unrelated” things to illustrate concepts when I want students to think critically instead of what they think they already know.  It is about generating learning, not just regurgitating facts.  It is about considering that which you do not know, and what that might mean, as it relates to the work that we do.

I began the class with an introduction that today we were going to consider an alternative perspective for thinking about the helping process.  Cue the first slide, of Rex.  The animation was set so that the only thing they saw initially was the first photograph.

This is your new client, Rex.  He is coming in for his first visit with you.  Tell me what you are observing.

They tend to be fairly concrete initially, with responses like “He is on a sofa; he has a toy next to him, etc.”  Then I animated the second photograph, and asked:

What does your observation of your client, Rex, tell you now about engagement, and what should you do?

They can get the changes fairly easily: his ears are back, he has moved his toy, he seems alerted, he is looking at you.

So, what does that tell you?  What do you think it means? 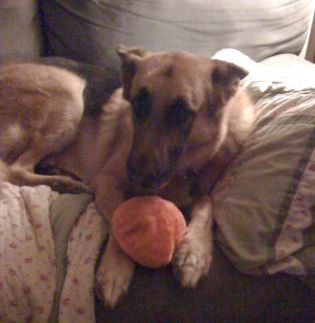 They get a little unsure here: maybe he thought you were going to take away his toy.  I responded “Maybe.”  But what else?  And what should you do?  Some answered what they would say to Rex, or ask Rex.  I allowed as how that might be okay, but he is not going to answer you, so that will not be useful.  He is a dog, and he does not talk, and he might not even hear what you said, or understand it.

What is the purpose of engagement?  What are the tasks, and the desired outcome?

The light bulb comes on:  establish a relationship; build rapport; help the client feel comfortable.  So now, some of them began to get it: he is anxious, something has disturbed his sense of content or comfort, and he is on high alert.  Behavioral response?  Get out of his space so he feels safe again.  Then we discussed how that applies to people in the situations in which we might encounter them when they are vulnerable or afraid, and don’t know what the “black box or shiny rectangle” means for them.  We applied it to the current case study we are analyzing of a person who is homeless, and role played it in an unscripted role play of engaging the new client who has just joined the street group of homeless people with whom our agency works.

I always have participants process afterwards, reflecting on what the experience was like, and what they observed and learned about themselves and others.  Then, I introduced the next segment of the helping process.

We have a guest lecturer from Ireland with us next, to demonstrate data collection and assessment.  Please let me introduce you to Puppy Stan.

After they watched the video and we discussed what it might mean for us as social workers, we again role played an unscripted role play of our street scene.  Some individuals chose to include some “distractors” even though I had not asked them to do so.  I have learned over some 26 years of practicing and teaching social work practice that experiential learning is an effective tool.  It enables us to step outside of our heads when we experience doing, and then when we reflect upon it, we sometimes see things from a different perspective.  I asked them to reflect (in writing) what they had learned from Puppy Stan, and what the most important “take-away” was from today’s class.

Dr. Suz acknowledges Dr. Jean Tubridy and Puppy Stan for the gracious permission to use their work.

Like Loading...
This entry was posted in Uncategorized and tagged Data collection and assessment, Engagment in social work practice, Experiential learning. Bookmark the permalink.