Fountain of the Four Winds

Posted on February 5, 2017 by Suzassippi

Enrique Alférez created the Fountain of the Four Winds sculpture and fountain in 1936-1937 for the Shushan Airport–later New Orleans Airport and currently, Lakefront Airport. Alférez served as director of the sculpture program for New Orleans WPA artists (Works Progress Administration), and was also responsible for the bas reliefs in the airport interior.

The four nude figures stirred controversy in the 1930s; in fact, Alférez is said to have stood guard at night with a rifle in order to protect the sculpture from vandalism.  Ultimately, Eleanor Roosevelt intervened and demanded the sculpture remain as Alférez created it.  All but the North Wind figures are women.  Alférez’ daughter explained that when her father was 12 years old, he joined Pancho Villa’s revolutionary army and gathered wood and water for the women who fed the soldiers and who often joined in the fighting–women who, he said, were the real backbone of the Mexican Revolution. (Fountain of the Four Winds. Retrieved from Friends of New Orleans Lakefront Airport)

The fountain is in the process of restoration.  To see it in 1938, with water, click the link above and scroll to the photographs at the bottom of the article. 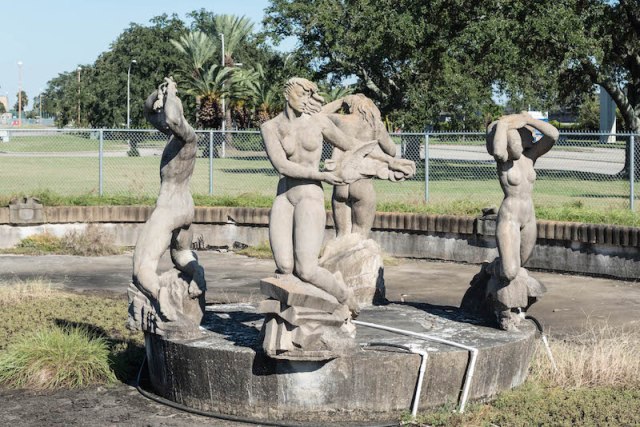 2 Responses to Fountain of the Four Winds