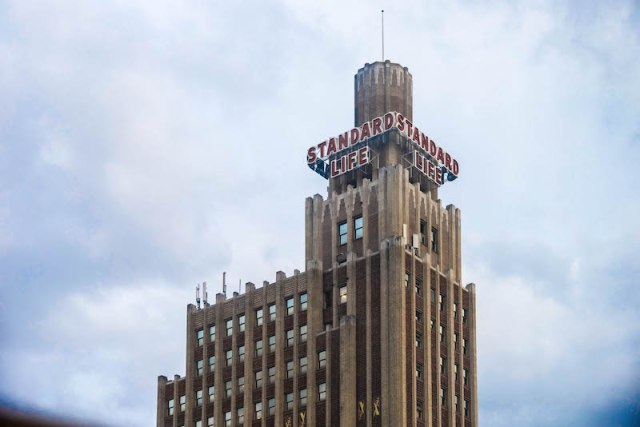 When I arrived at the historic King Edward Hotel (now known as the Hilton Garden Inn) last Tuesday afternoon, I opened the drapes to check my view, and spied the Standard Life building.  Little did I know at the time where that one photograph would take me, or that the last option I would choose to discover the answers to my confusion would be right back to Preservation in Mississippi‘s E. L. Malvaney.

I started with the newspaper archives, as is my habit these days, because it is just so fascinating to read about history from the perspective of what was just “news” at the time it was written.  The first thing I found was this:

A Century of Progress

A great many people of Jackson have not been financially able to go to Chicago to see the great world show.  The next best thing to seeing A Century of Progress would be to go to the office of the Highway Commission and see the great number of people they have employed.  We understand, when you see this show, if you visit it first in the day time and then visit the same place at night, you will see just as many people on the night shift as you saw on the day shift.

The only surprising thing about it will be that the Standard Life Building is strong enough to hold up as much weight as there is on that floor.

When you enter the building, you might think that Jim Farley had arrived. (The New Deal. Jackson, Mississippi. October 20, 1933, p. 3)

So, who was Jim Farley, and what did he have to do with the Standard Life Building?  I will get back to that later, because this is one of those convoluted trips through time.  Meanwhile, go back to 1929, and the only thing I can find searching Standard Life was that it was the first completed of three skyscraper projects in Jackson in 1929.  According to the Biloxi Daily Herald (Dec. 31, 1929, p. 8), the Standard Life building was open for occupancy, and had “set a world’s record pouring concrete” (Clarion-Ledger, Nov. 17, 1929, p. 32).

Only now, it is Jackson’s newest Tower Building that breaks the world’s record for the fastest concrete work (Clarion-Ledger, Sept. 10, 1929, p. 10).  Huh?  Greenwood’s Commonwealth (Apr. 9 and 17, 1929) described the Tower Building as  22 stories of reinforced concrete and brick with terra cotta or stone trim, set-backs at 13th, 15th, and 17th floors, Gardner & Howe as structural engineers, and O. M. Grim Construction Company as builders.  Now I did what any self-respecting Mississippian who wanted to know something about an historic Mississippi building would do: I checked the Preservation in Mississippi blog.  Lesson learned: I should have started here.

The Tower Building was the name assigned by newspaper editors when the building did not yet have a name according to MIP‘s E. L. Malvaney (Newspaper Clippings: Jackson’s Art Deco Icon at the Beginning, August 1, 2012).  When the Standard Life Insurance Company relocated from the “new 12-story building” constructed by Plaza Investments into the Tower Building, they changed the name.   The first newspaper reference I find connecting the building with the Standard Life Insurance Company is in 1964 when the Clarion-Ledger noted the the home of the company as Mississippi’s tallest skyscraper and the photograph pictured the former Tower building.

8 Responses to Standard Life Building: The towering Art Deco of 1929