Shutting down the windmill

In what has become the new normal, I headed to Texas last week instead of to Biloxi–the carefully laid plans of the past year out the window.  J decided to go with me to help, and while it is rather unlike his nature, the help he provided was greatly welcomed by the household and the neighbors.  For several years, the windmill has squeaked.  It was not all that loud at first–just the kind of gentle creaking one used to living in the country grew up with.  Key point: one used to living in the country.  In an area where “city water” was nonexistent for many years, a functioning windmill was necessary.  Every day after school, my brother and I had to go shut down the windmill (with the brake, attached to the rudder) and remove the worn graphite packing string from the sucker rod, and replace it with new string.  The graphite string acted as a seal around the sucker rod and the valve, preventing water spillage. 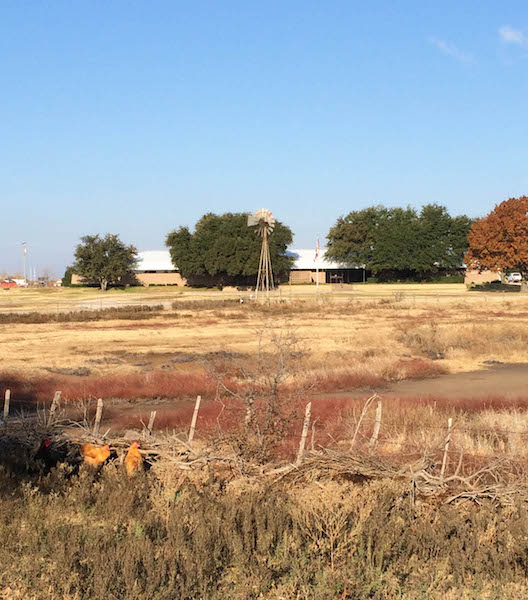 The windmill has not been necessary for many years in terms of pumping water.  The rods to the well were disconnected, but Dad enjoyed seeing the windmill turn–a scene that is comforting and pleasing to watch.  There is a long story involving that building visible behind the windmill, but keep in mind, the windmill and this pasture land has been here far longer than the business that decided to set up shop in the midst of rural pasture land where cattle, goats, and horses grazed. 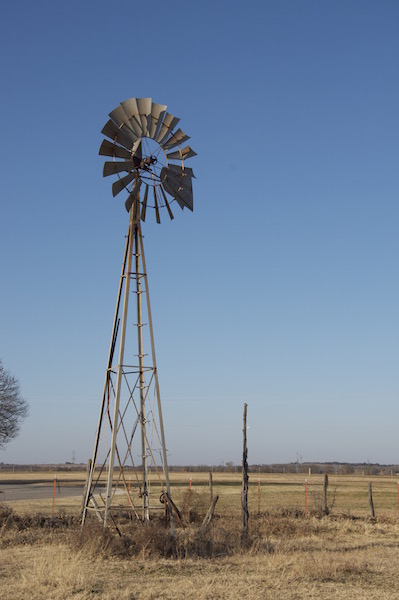 In November, I told Sis we had to do something about the windmill squeak, which was noticeably louder–reaching the point of becoming downright annoying.  If you were in the house as they always were, it was not audible.  Out in the pasture or the barn, or doing the painting and repair chores that always fell to me (Sis and I have different skill sets!), it was obviously a nuisance.  The second evening we were there, I went out to feed and J asked “What is that god-awful sound?” Oh, that would be the windmill.

Spring is the windy season in northwest Texas, and it was flag-straight-out wind all week, thus, a never-ending screech.  Tuesday night was the mother of all storms, and for the first time, I could hear the windmill in the front bedroom.  I began looking up windmill repair.  There are certainly enough farmers and ranchers in the area who continue to utilize windmills to pump water for stock that I thought someone surely must be in the business.  They probably exist, but for obvious reasons, do not seem to be listed on the Internet.  Later that morning, I remarked to J that I was trying to find someone to fix the windmill and laughingly said I’d told his dad I needed to get this taken care of before he decided to climb up that tower.  “Too late–I already did it last night.”  In the storm?  In the dark?  “I have a flashlight.”

The short lateral bars on the tower leg next to the flag are used to climb up to the platform (long gone) in order to service the windmill.  He had determined the motor, gearbox, and remnants of the brake were all missing or broken, but he had a plan.  It involved physics, and when I expressed concerns, he assured me “Mom, I know not to put my hands or any other body parts into a moving wheel with blades.”  I booted up and we headed over to the corner of the pasture with a lasso, metal hook attached to cables, and bungee cord (I insisted on a safety harness of some type).

The Plan. Securely knot lasso to base of tower, wrap lasso around and through tower, climb up to mid-tower, secure self with bungee cord in the event of loss of footage, wait for the wind to die down and the wheel to stop turning, toss hooks attached to cable secured to lasso through center of wheel and wait for wind to turn the wheel until the hook/cable caught and wound up the rope enough to stop the wheel from turning. Sounds simple right?

It was.  I gained a new revelation about indeed how smart my son is, and how competent he is.  When he began his ascent up the tower, a young woman with a small boy walked from the house across the road to the west and asked, “Are you greasing it or shutting it down?”  Shutting it down.  “Oh, thank you, thank you!”  She stood and watched and when we finished, I walked over to talk to her, and briefly explained about Dad’s failing health in the past three years, and that I had been unaware of how loud the windmill had become until this trip.  I said we were just aiming for a temporary fix until I could find someone to shut it down permanently.  She said her husband could do it, and the next day, over to the house he came.  Turns out, what he really wanted was to buy the windmill and move it to his property–just because he liked looking at it, too.  However, he was very gracious when I said I did not think we would sell it as long as dad is living.  I asked what he would charge to secure it permanently since eventually the rope would give out because of exposure to wind, sun, and rain.  He said nothing, and we walked to the shop to secure a length of chain and a link clip, and I told him when we got ready to sell the windmill, I would let him know.  Actually, I thought later that J had already done the hard work, and at that point, we could have secured it with the chain. 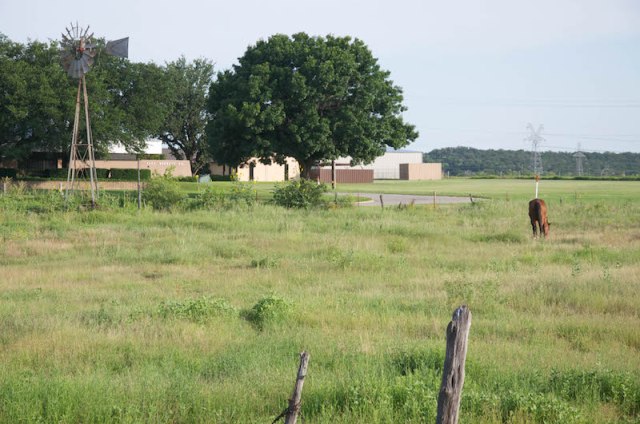 I am sure the entire neighborhood all stopped to scratch their collective heads and ask, “Do you hear that?  I mean, do you not hear that?”

12 Responses to Shutting down the windmill