526 Franklin, corner of Franklin and Union in Natchez, currently is home to Edward Jones Investments.  The circa 1890 building was restored from a pretty horrid mid-60s or thereabouts “update” when the lower floor was remodeled with jeweler’s windows.  The building was former home of Busch’s Jewelry from at least 1960 to 1979, based on a news item in 1960, and the photograph from the nomination form for Natchez-on-top-of-the-hill historic district (Mary Warren Miller, 1979).  The photograph shows 526 Franklin at the far left edge, and you can discern the dark brick facade with the small square jeweler’s window displays. 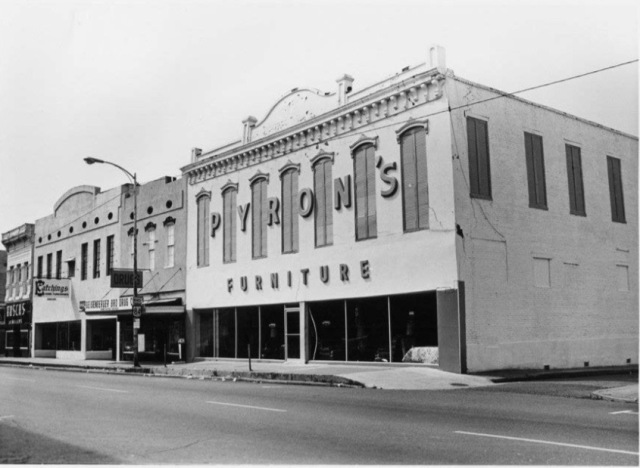 The contract for the erection of Mr. S. Haas’ new store at the corner of Franklin and Union streets, was yesterday awarded to Capt. B. B. Davis, whose bid was $3,555.00…The store will have a frontage of twenty-five feet with a depth of sixty feet; will be two stories high with an iron front, with stores on the first and offices on the second floor.  Messrs. O’Brien & Co. will do the masonry, and Capt. Davis expects to commence work at an early date. (A New Store Contracted For. 10 April 1889, p. 5. The Weekly Democrat.)

The cornerstone was laid April 23, and the brickmasons were at work, with a projected date of walls erected in “three or four weeks” after which they would begin construction of the new Phoenix Engine house (The Weekly Democrat, April 24, 1889, p. 8). In June, building operations in Natchez were stopped “on account of the scarcity of lumber and other necessary building materials” and the Haas store was waiting for the completion of the casting of the iron front (The Weekly Democrat, June 5, 1889, p. 3).  Sam. Haas’s Hog & Hominy Store did business next door at 522 Franklin until his new store was completed.  Mr. Haas announced he would sell his entire stock, and had rented his store May 9, 1893.