Forks of the Road Historical Site 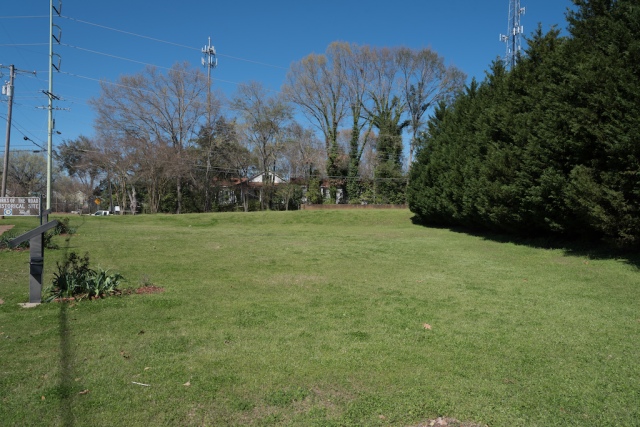 While the first black slaves were brought to the Natchez area by the French around 1720, it did not take long for the business of trading in the buying and selling of human beings to expand.  By 1810, more than 8,000 slaves lived in Adams County (Ronald L. F. Davis, 1993, The Black Experience in Natchez: 1720-1880).  The number had increased to 14,292 when the Civil War began.  One of the most notorious of the slave traders was Franklin & Armfield.  Armfield was located in Virginia and Franklin oversaw Natchez and New Orleans (Barnett & Burkett, The Forks of the Road Slave Market at Natchez, Mississippi History Now.  Barnett & Burkett quote J. H. Ingraham (1834) who described the market as “occupied a prominent knoll” and one building “straddling the city’s corporation line.”  The two black rectangles below show the approximate locations for where the wooden buildings were located that formed part of the enterprise in 1853, surrounded by a fence and gate. You can see the hand drawn map by a Civil Engineer in 1853 available at the Barnett & Burkett link above. 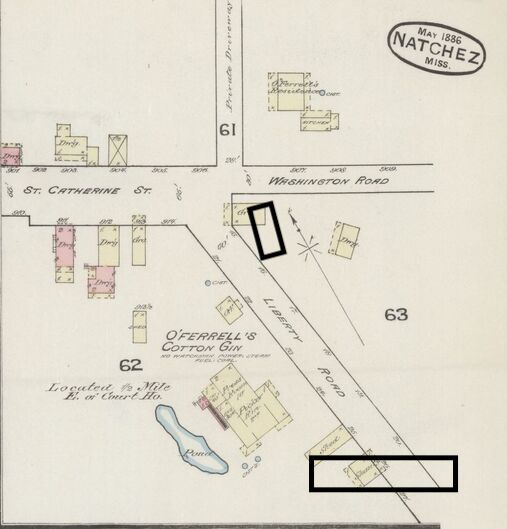 John Law and his Company of the West was in charge of “developing the lower Mississippi River Valley into a profitable component of the French empire in the New World” (Davis, 1993, The Black Experience in Natchez: 1720-1880).  Law’s company plan was to bring 3,000 African slaves to Louisiana to develop the plantation system along the Mississippi River from New Orleans to Arkansas.  The plantations were intended for tobacco and indigo.  Other expectations of the plan were slaves would cut timber, build forts, work the river trading network, and “in times of war…provide the Company with an army of enslaved soldiers to be used against opposing Indians and European competitors.”  The French Code Noir  was developed to “systematize slave/master relations.”  By 1763, approximately 6,000 black slaves had been enslaved from Guinea and the French West Indies when France ceded Louisiana to the Spanish. 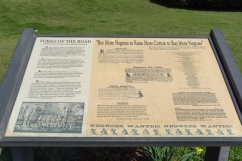 Although Armfield and Franklin, along with plenty of other ruthless traders in human lives, gained tremendous wealth through their practices (well documented now, and seeing the light of day alongside the “charming antebellum mansions” that profited from the immoral and unethical practice, the ‘trade’ collapsed with the occupancy of Natchez by the Union troops.  Not long after Reconstruction ended and Jim Crow began, the sordid history of this period was mothballed, or as Steven Hoelscher articulated it:

…the process of racialization as an essential aspect of how everyday geographies are made, understood, and challenged.  …a primary root of modern American race relations can be found in the southern past, especially in how that past was imagined, articulated, and performed during a crucial period: the post-Reconstruction era known as “Jim Crow.” (Making Place, Making Race: Performances of Whiteness in the Jim Crow South. 2003. Annals of the Association of American Geographers, 93(3), 657-686)

Hoelscher defined the ‘white cultural memory’ that ‘relied on performance, ritualized choreographies of race and place, and gender and class’ that were exemplified in the Natchez Pilgrimage and its expression of ‘cultural hegemony based on white supremacy.’  In those ritualized expressions, the story of enslavement was a mere footnote, like their lives, relegated to an emotionless, speechless, passive role–like a walk-on cameo.

That is changing because of the activism initiated by Ser Seshs Ab Heter-C. M. Boxley, and others.  Boxley’s commitment is to “restoring humanity to his enslaved ancestors.”

This is the next battleground–that the true history goes up there and is not watered down.  We’re not concerned whose toes we step on.  This is sacred ground.  Right here is where all those inhumanities and contrasts operated.  They learn the physical history, but not the human history.  That history is omitted.  It’s not told; it’s not shown.  There’s a human story that has to be told.

Like Loading...
This entry was posted in Mississippi and tagged Forks of the Roads, Natchez Pilgrimage, Natchez Slave Market. Bookmark the permalink.