The one-story Classical Revival former Carnegie Library was funded “under the usual conditions” by Andrew Carnegie after “Mayor John O. Bonner [sic] has been untiring in his efforts to secure the donation from Mr. Carnegie.  He conceived the movement, put it into execution, and to him is due the credit” (The Tennessean, Dec. 18, 1909, p. 1).  “The usual” meant in exchange for the $7, 500 cost of erecting the building, the town provided the lot, $750 per year for maintenance of the library, and free usage.

While Mayor J. O. Bomer did indeed write to Carnegie and request funding, others were involved in the development of a public library in Brownsville.  As early as 1903, the Brownsville Book Club had “under consideration a plan for a public library…but has not yet fully matured its plans” (The Tennessean, Mar. 21, 1903, p. 8). In 1936 the library had about 4,000 books, including a “modern encyclopedia” (Jackson Sun, Jul. 23, 1936, p. 4). 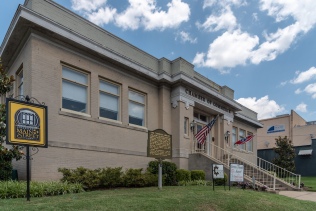 But the years have taken a toll on the historic building…basement leaks, some of the bricks are cracked and falling and there’s not enough room for all the books. (Jackson Sun, Apr. 24, 1990, p. 1)

Although at one point after the new library was constructed, demolition was on the discussion agenda–after all, that basement leak was first documented in 1952!–the Save the Carnegie Committee prevailed.  The 3, 873 square-foot Brownsville Carnegie was restored/renovated in 1994 at a cost of $245,000 (Jackson Sun, June 1, 1994).  It is currently in use as home to the Chamber of Commerce.

Like Loading...
This entry was posted in Classical Revival, Historic Downtowns and tagged Brownsville TN, Carnegie Library. Bookmark the permalink.