The New Deal’s Resettlement Administration was established in 1935, under the Emergency Relief Appropriation Act of 1935.  The RA’s purpose was to create planned communities to “resettle destitute or low-income families from rural and urban areas” (Resettlement Administration, Living New Deal), rehabilitate overused land, and make loans to purchase land and equipment by farmers and tenant farmers, or sharecroppers.  The RA lasted only a couple of years, but in 1937, the Farm Security Administration was created and lasted until 1946. 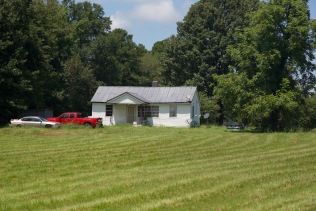 One of the resettlement projects was Haywood Farms in Tennessee, for African American farm families.  In 1937, it was still acquiring the land for the proposed Douglass Community project.  By June 1938, over 100 houses for tenant farmers had been built or repaired for West Tennessee.  At Haywood Farms, 19 houses were nearing completion.  W. O. Wyatt, a contractor from Jackson, received the contract to complete 34 farm units, with four buildings for each unit.  The houses were 4-room frame houses, 36’8″ by 22’8″ and included stock barn, poultry house and smoke house, and a well.

Along with the houses and farm buildings, the project was responsible for construction of a school and well for the rural community children.  The first building was frame, later bricked and with some alterations to doors and windows and included grades 1-10.

At the beginning of the first crop season, Haywood Farms was described as “one of the most outstanding agricultural projects in the nation developed by the United States Department of Agriculture” (Haywood Farms Opening First Crop Planting. (Apr. 27, 1939). The Jackson Sun, p. 16).  At completion, the project included 5,400 acres and 56 units with each having over a 100 acres of farm land.  The average cost of each unit, including house and farm buildings, was $2,000.  The first crop included strawberries, fruit trees, grapevines, sweet potatoes, and Irish potatoes.

At some point, an additional building was constructed that serves as the community center.  Many of the original houses are still in use and others have been enlarged and improved over the years.  The Douglass Community holds a homecoming celebration annually in August and remains an active community.