The Unknown: Tea cups and the future

Much of the time I can recall where I obtained a particular tea cup or saucer (if not a matched set), but what I recall about this one is that I also bought a second one in the same pattern, only it had a violet colored flower in the inside lip.  I do not apparently still have that one.  It is unmarked, and I have not turned up a picture of it yet, and frankly, have too much on the plate right now (I may be working more and harder from home than when I went in to work physically) to spend more time looking.  The saucer is c. 1953-1968 “Autumn Gold” distributed by the Century Service Corporation in Alliance Ohio, but was made by Homer Laughlin China Company.  The description reads 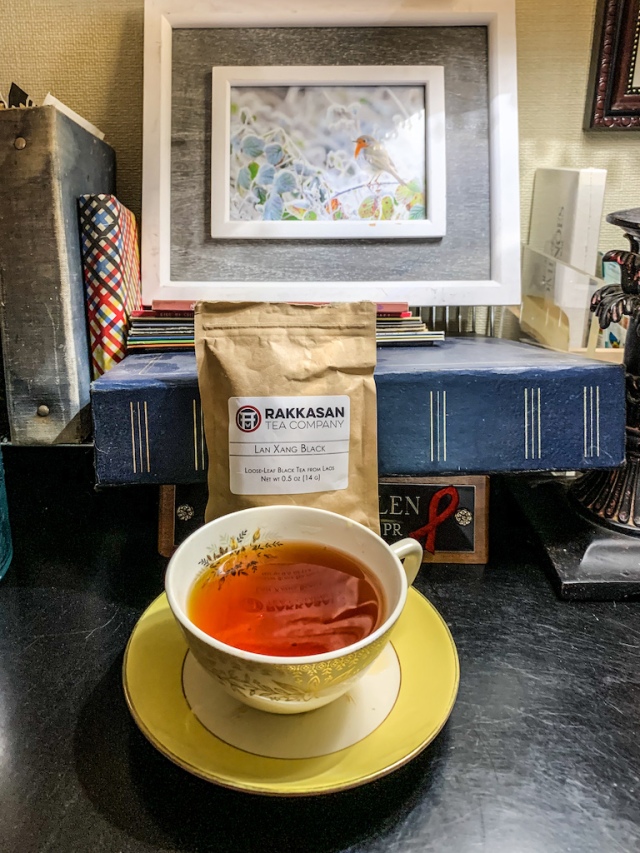 The tea for today is Rakkasan Tea Company’s Lan Xang Black, sourced from

Rakkasan reports that Lan Xang Black is sun-dried, and known as a “shai hong”.  Shai hong is not heated during processing, rather is sun-dried.  It is a robust tea, and would likely taste good with milk and sugar, which I do like to do on occasion, although most of the time I drink tea straight.  I found it to have a strong, woody and slightly astringent taste, but one I like as I prefer tea and coffee on the stronger side.  Rakkasan’s tea notes explain that the sun-drying process is not well known in the West, and gives the tea characteristics similar to a pu’er.  I have a pressed cake of aged pu’er, so perhaps I will submit them to a taste test next.  The farmer oxidizes Lan Xang in a banana leaf.

Note: The photograph of the bird on a frost-covered branch is from Catherine Drea, amazing photographer and artist from Ireland.

2 Responses to The Unknown: Tea cups and the future