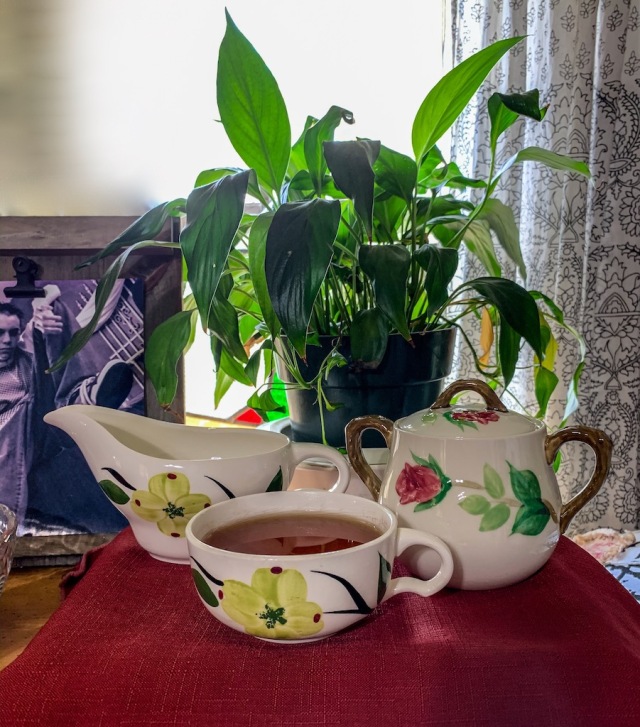 Looking for the creamer (also identified on some sites as a gravy boat), I spotted Grandma’s sugar bowl in my china cabinet.  My intention this morning was to have my Nine Dragons Oolong with cream and sugar…but that ended up being way too much work.  On occasion, I really do enjoy my tea with at least warm milk, and sometimes sugar, though for the most part, I prefer mine plain.

When Grandma went into the nursing home and packed up her house, she laid out things she wanted people to have.  She gave me a lovely blue sugar bowl, which actually still had sugar in it because no one had ever looked inside while packing it.  I carted it off to my house only to get a phone call from Mother in a few days saying,

Grandma said she gave you the wrong sugar bowl.  It was supposed to be a different one, and she wants you to bring that one back.

Me: Does she want the sugar back, too?

So, I carted the blue sugar bowl (minus the sugar) back the hour and a half to my mother’s to return it, and get the one I was “really supposed to have.”  Let me just say that this exchange of items that were deemed “mistakes” were not limited to just me…but after all, I figured she could do with her things as she wished.  I then dutifully carted the substitute sugar bowl, along with the creamer AKA gravy boat in the dogwood pattern that no one wanted except me, back to my house and into my china cabinet.

Tracking down anything about Norleans was elusive, but I managed to piece together a bit of the story. 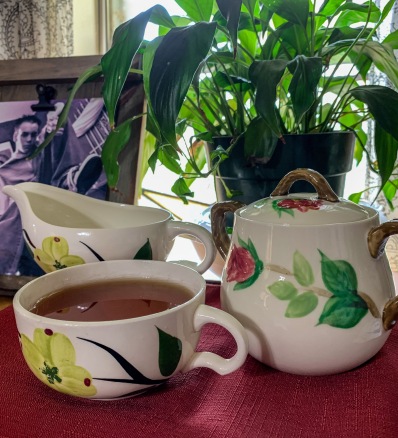 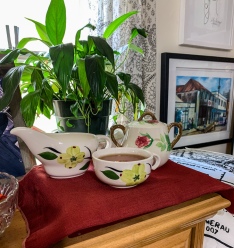 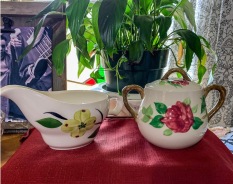 American Beauty Rose was a pattern of pink rose, green leaves, in an earthenware manufactured in Japan.  The sugar bowl and lid sell for $21.99 to $37.99 on Replacements LTD, but you could buy an entire set for around that when it first appeared in the 1960s.  The United Glass and China Company was founded in 1850 in New Orleans and began trading with Japan in 1932, until it was suspended during World War II.  Norleans was started in 1949 by the United Glass and China Company to resume post-war trade with Japan.  In the 1950s, trade was mainly in the dinnerware, manufactured by Meito China, the Japanese manufacturer.  The Official Gazette of the United States Patent Office, Volume 641, 1950, p. 746 provides patent information for the Norleans brand:

In Made in the Twentieth Century: A Guide to Contemporary Collectibles by Larry R. Paul, 2005, we also learn that Eva Zeisel, born in Hungary, began teaching mass-produced ceramic design at the Pratt Institute in 1939.  Among the companies she designed for were Homer Laughlin, Red Wing Pottery, Norleans lines for Meito China, and Hall China along with others.  The Norleans trademark expired in 1992.