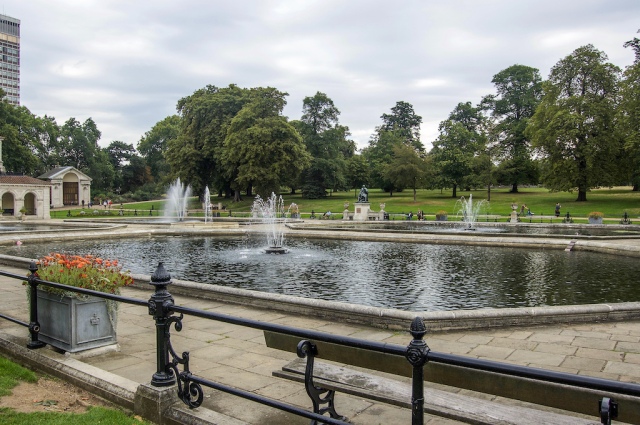 In this lovely Hyde Park Italian Gardens setting, one can almost overlook the statue of Dr. Edward Jenner.  Jenner is the tiny little statue you see in the approximate center of the photograph, beyond the pool of the fountains.  The Gardens themselves were designed by James Pennethorne in 1860 and are considered one of England’s historic sites. 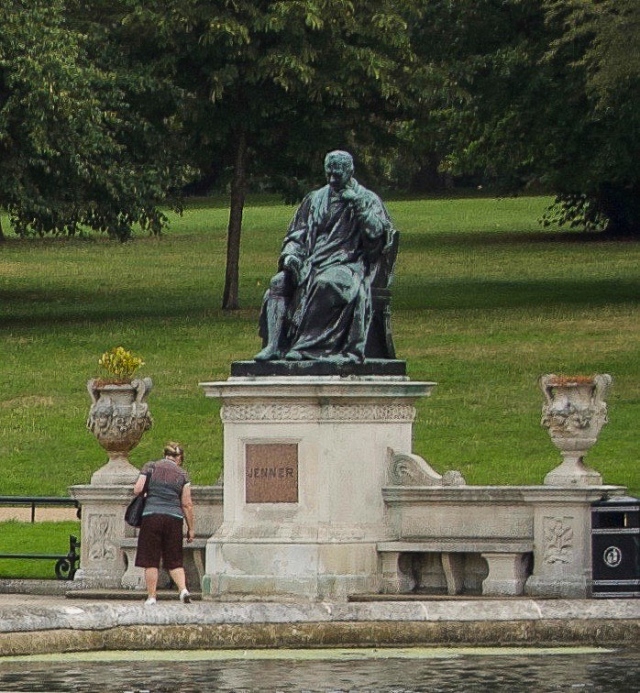 Jenner’s statue is bronze, by the sculptor William Calder Marshall.  It was unveiled in Trafalgar Square in 1858 and moved to the Gardens in 1862.  Dr. Jenner’s place in history is due to his work for a smallpox vaccine.  The Observer, Nov 4, 1798, p. 3 carried an item about the discovery:

Preventive to the Small Pox

In a former Paper, we announced the discovery of a complaint in Cows, that produced, by inoculation, a local infection in the human species, which operates as a direct and efficient preventive to the variolous contagion…

Dr. Jenner, of Berkeley, in Gloucestershire, with much creditable zeal, has devoted particular attention for some years past to ascertain the origin and the effects of the Cow Pox.

Dr. Jenner spent many years tracking and studying the effects of cow pox, learning that people who were infected with cow pox did not contract small pox, or if they did, a very mild and not fatal case.  In 1802, approximately 45,000 patients in the UK died from small pox.  While we might think that those who eschew vaccination currently are an anomaly, in 1821 Dr. Jenner wrote to a woman who questioned the efficacy of vaccination to prevent small pox:

This island might have been entirely freed from the pestilence many years ago, if its wisdom in this particular respect had kept pace with many of the Continental kingdoms, where small-pox has been entirely unknown for many years…where vaccination has been solely and universally propagated, small-pox has been wholly got rid of, and never brought back again, even after periods of years have elapsed in most instances.  I am sorry to find the poor people around you are so infatuated, but does the fault lie with them? (The Morning Post, Feb 10, 1821, p. 4)

Dr. Jenner died from an “apoplectic fit” (sudden loss of control as a result of brain hemorrhage or blockage of vessel) on January 26, 1823.  His discovery was lauded as “one of the greatest benefits ever conferred by Science on suffering Humanity, and been hailed by the unequivocal benedictions of every people amongst whom his important discovery  has gradually extended” (The Royal Cornwall Gazette, Feb 1, 1823, p. 2).

I can remember lining up in the cafeteria of Seymour High School for my Salk oral vaccine against polio, and receiving my small-pox vaccination from the Olney Lovett-Meredith Clinic, along with the resulting scab and subsequent round scar–now almost faded and barely visible.  If they have a vaccine for COVID-19 and I am still alive, I will be lining up for it.