Yesterday, I posted the first part of the series on the Black Legion, the organization labeled in 1935 as a terrorist organization by the US government. Yes, you read that correctly: The anti-Catholic, anti-Jewish, anti-Negro, anti-labor organizer offshoot of the Ku Klux Klan of “60,000 to 100,000 armed and disciplined men clustered in the cities of four contiguous midwestern states” and “the most formidable nativist organization around” (Amann, 1983, p. 491) was labeled a terrorist organization.

Among the initiation rituals and vows, the recruits had to demonstrate they were born in the US, white, Protestant, and gentile and that they understood they were joining a terrorist organization, described in the ritual as “classed by our enemies as an outlaw organization” (p. 496).  They were required to promise to commit voter fraud as ordered, perjure themselves if ordered to do so, and support lynch law, secure guns, and oppose immigrants, blacks, Catholics, and Jews.

Because it was an organization that thrived on secrecy, it was also coercive to members who might have been deemed out of line, or if the Legion thought they were immoral. I find the first mention of the Black Legion in the newspapers in March 1935–even though it was 10 years old at that time.

Persons battling the organization asserted Monday that they did not expect to obtain any official action to clean up the order because its membership extended into the highest political and business circles. ..the order [Bullet Club] has its basis in a secret organization, reputedly of National scope…known as the Black Legion.

‘We were given orders that we and our families had to work and vote for certain candidates or else’–a former member said.

A short month later, the Pontiac Police faced the hearing related to the charges that two sergeants were members of the Bullet Club. The police chief had suspended the two men, stating their membership was incompatible with police service. The chief himself had been suspended in December, but reinstated after his trial. He provided evidence that his dismissal was “one of the aims of the Bullet Club and that it was planned to install one of the two currently charged officers as chief, and one as captain. A charge was made, however, that three members of the City Commission were members of the Bullet Club and expected to oppose the officers’ dismissals (Pontiac Police Face Hearing: Bullet Club Evidence to be Presented, April 8, 1935, Detroit Free Press, p. 8).

The secrecy began unraveling, and in August, a complaint by a farmer who alleged he had been forced to join the Black Legion against his will resulted in the state police arresting 3 men connected with the organization. Earlier in August, five men were arrested in connection with a kidnap plot. All had guns and black and red hooded regalia with the skull and crossbones insignia and were charged with carrying concealed weapons.

Next, I will take a look at the murder that would blow the lid off the organization and expose its rotting inner workings to the world. Amann provided a well-documented evolution of the Black Legion and its acts, including arson, bombing, and murder of labor organizers, along with their plans to murder Catholic municipal leaders and others they deemed “radicals.”  They began to plan stealing arms and ammunition from government arsenals and to take over the government.  They explored bacterial infection of “enemies” and had a plan to kill one million Jews during Yom Kippur.  They were able to exploit the political system and escape justice through the cooperation of municipal leaders and police in a number of urban areas.  When the news broke about the Legion’s murder of WPA worker Charles Poole in May 1936, it created a public revulsion the Black Legion was not able to overcome.

Even a Utah paper published a comment about the Black Legion and Hitler when at the 1936 Olympics, Hitler refused to shake the hand of medalist Jesse Owens: 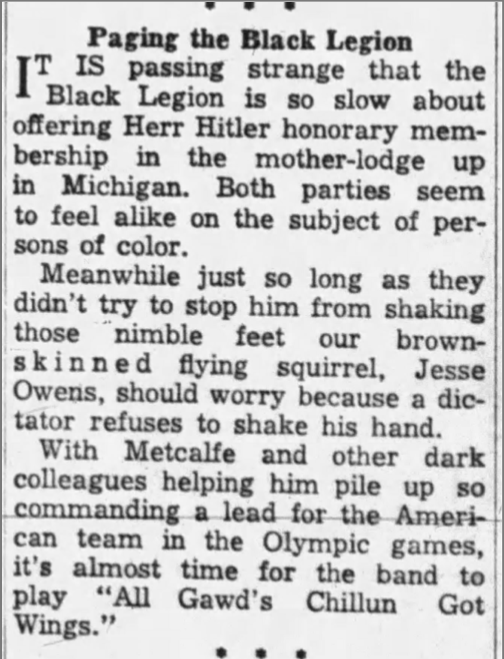 9 Responses to The Black Legion: Exposed